Since I opened Pan Homo Art Gallery (or PHAG) last year, I’m often asked – what is gay art? Why do we need gay art? Can’t we just like art in general?

So, to try to answer all these questions, and more, I invite you to follow this blog, where I will be discussing queer and gay art and artists from Israel and around the world, showing new works in the gallery and promoting various LGBTQIA+ related agendas. I believe in change. I believe in the power of art to heal and open minds.

We begin with the most recurring question: What is gay art and why do we need it? Well, first and foremost, gay art is, of course, anything created by an LGBTQIA+ artist, and/or deals with the LGBTQIA+ experience. I suppose most people would not have a second thought about the necessity of Chinese, African or Jewish art, then why, when it comes to LGBTQIA+ people, and gays particularly, people find it odd? Maybe it is because they don’t give our sexuality the credit it deserves in shaping out many aspects in our lives: Being an LGBTQIA+ person is being a part of a culture, and as such, it includes symbols, history, language, days of memorial and holidays – everything that characterizes a culture.

Art as we know it has always been a part of human cultures. Same-Sex attraction existed since long before documented history, and certainly since before the 19th century, when the term “Homosexual” was coined. While some of the ancient world accepted it as a natural fact of life (like the ancient prostitute priests of pagan societies), others (like the Catholic Church) tried to abolish it completely. Since the rise of monotheist religions, homosexuals have been forced to hide, and so did homosexual art, up until very recently.

Homoerotic art was found from as early as Mesolithic era, some 9000 years ago. Some of the most well-known, groundbreaking artists in history, such as Michelangelo, Leonardo Da Vinci and Caravaggio, made Homoerotic and male art. One of the most famous ancient gay art pieces in the world is the Warren Cup, from around 10 A.D, which was bought by the British Museum in 1999 and is said to have originated in Jerusalem. It depicts overt homosexual acts and is said to have been buried by wealthy Romans, as they fled monotheist Jewish rebels who took over Jerusalem in 66 A.D. Back to the here and now:

By presenting LGBTQIA+ness in public space through art we normalize the mere idea of being LGBTQIA+ and the aesthetics of it. Homosexuality is no longer forced to hide in smut magazines and dark underground clubs – it is now presented in museums and galleries, and gay love and affection is a common imagery in the media.

One of the most important and influential gay artists to date is David Hockney, who created gay art in England when it was still illegal, before 1967 when it was decriminalized. 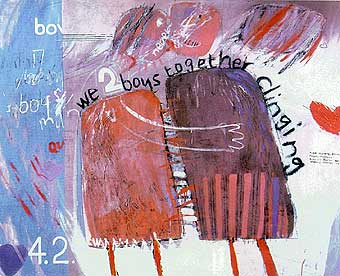 Many artists find inspiration in his works and refer to his techniques. So is the case with American gay photographer Terry Hastings, with his nude series, which were recently added to our collections. Terry's series refers to Hockney's use of numerous polaroid pictures to create one image. Dror Amsallem - Look Out / Fading Away

Homo art usually was a best seller: Artists like Andy Warhol sold very well in his lifetime, and Israeli gay photographer Adi Nes’ who’s artwork “Untitled” (1999) print was sold for a staggering amount of $264K in 2007, are perfect examples. It is the highest bid for a fine art photography print, to have ever been placed in Israel.

When we buy queer art, we not only support gay artists financially, but also contribute to normalizing and accepting LGBTQIA+ culture. By presenting homo art in a visible spot we make it accessible to people in our lives. After years of hiding in the subtext, being illegal or subversive, in the last 50 years LGBTQIA+ art is here to rightfully claim its place in row with other significant consciousness-expanding, mind-altering currents in art, and museums and galleries are starting to pay better tribute to this aspect of the art world.

Artworks like Michael Golian’s “Gay Daddies” could not exist up until very recently, because same sex families have not been socially acceptable until recently in Western society. It may take more time until gay art stalls appear in international art fairs like Art Basel, or in the Venice Biennale, but hopefully in the near future we will see this change. It has not even been 10 years yet since gay marriage had been legalized in the U.S, let alone other countries where it is still not legalized, like Israel.

In 2018 police was called because the front window of an art gallery presented a video artwork of two men kissing. The police demanded that the piece will be removed to restore public peace, following a complaint. Of course, the piece was allowed eventually, and was not removed, and since then a few gay art projects sprung in Tel Aviv like non-profit Artiq, curated by Yael Rozin, and others, like Pan Homo Art Gallery.